After high levels of volatility for most of the first half of the year, a shift in expectations that peaking inflation and slowing growth could push the Federal Reserve to slow the pace of its rate hikes bolstered equities throughout July. The NASDAQ and the S&P 500 Index registered their best monthly performance figures since July and November of 2020, respectively. Better-than-expected earnings from tech giants such as Microsoft, Google and Amazon also acted as a catalyst for higher stock prices. In other news, U.S. GDP fell at an annualized rate of 0.9% in Q2, following a 1.6% decline in Q1. Two straight negative GDP prints met the unofficial definition of a recession, yet key policy makers, including President Joe Biden and Fed Chairman Jerome Powell, argued that the U.S. is not in a recession.

Canada’s benchmark S&P/TSX Composite Index jumped 4.4%, with eight of the 11 underlying sectors producing gains during the month. The industrials and information technology sectors led the way, with respective gains of 10.4% and 10.0%. Health care was the main detractor for the period, with a loss of 8.6%. Small-cap stocks, as measured by the S&P/TSX Small Cap Index, jumped 7.6% for the month.

The U.S. dollar depreciated by 0.6% versus the loonie during the month, dampening the returns of foreign markets from a Canadian investor’s standpoint. Note that all returns in this paragraph are in CAD terms. U.S.-based stocks, as measured by the S&P 500, climbed 8.6% in July, while the NASDAQ rose 11.8%. All of the S&P 500’s underlying sectors were in the black. Leading the way were the consumer discretionary and information technology sectors, with respective gains of 18.3% and 13.0%. International stocks, as measured by the MSCI EAFE Index, gained 4.4% in the period, while emerging markets faced losses of 1.2%.

Turning to commodities, the price of a barrel of crude oil retreated 6.8% during the month, while natural gas prices surged 51.7%. Copper, silver and gold had a negative month, with respective losses of 3.8%, 0.4% and 2.5%.

Inflation in Canada stayed elevated with an 8.1% year-over-year rise in June, the highest print since 1983. The year-over-year increase in June was largely driven by higher gasoline prices, which rose 54.6% from a year ago. The Canadian economy lost 43,000 jobs in June, but the nation’s unemployment rate improved to 4.9%. The Bank of Canada increased the policy rate by a full percentage point to 2.5%, marking the largest rate increase since 1998.

U.S. nonfarm payrolls increased by 372,000 in June, and the unemployment rate remained at 3.6%. The Consumer Price Index rose again in June, accelerating to 9.1% year-over-year. Gasoline, groceries and rent were the largest contributors to rising inflation. U.S. retail sales jumped in June by 1.0%. The Fed raised rates by 75 basis points for the second time in a row, taking its benchmark rate to a range of 2.25–2.5%. Fed Chairman Powell acknowledged that the pace of rate hikes could slow at some point, depending on the data the Fed watches. 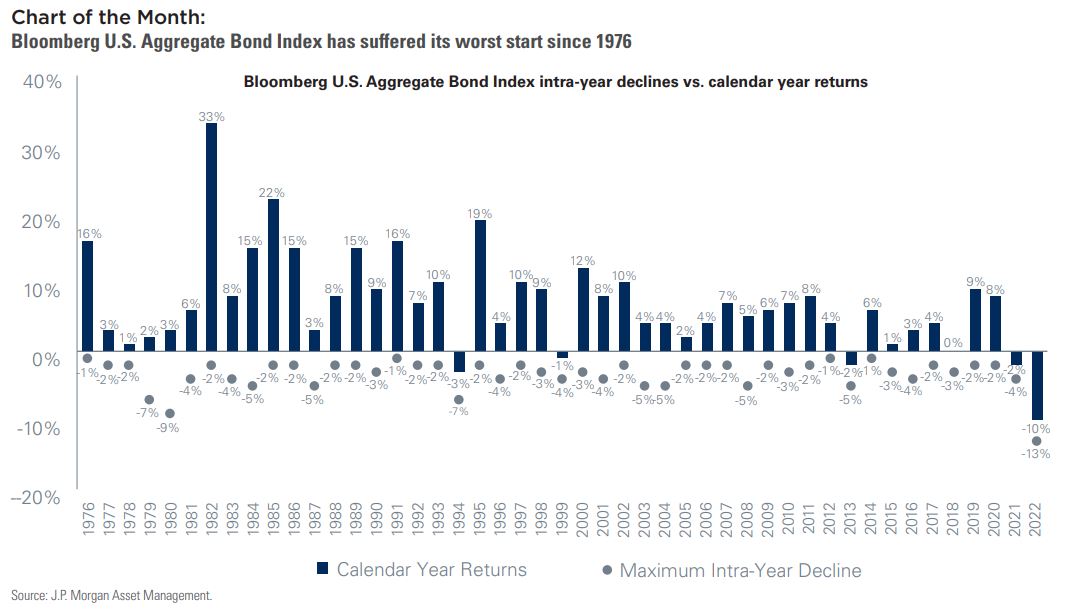 Interest rates across the yield curve have risen significantly on a YTD basis, and as a direct result, bond prices have taken it on the chin. The speed at which rates moved higher in the first half of 2022 led the Bloomberg U.S. Aggregate Bond Index, a widely used proxy for the overall U.S. investment grade bond market, to its worst H1 performance since its inception 46 years ago. The index ended June 10% lower than where it was at the start of the year, although it was lower by as much as 13% a bit earlier in the year. While yields certainly could continue to move higher and bond prices could experience additional losses, longer-term rates have been slipping as the market is looking beyond the inflation story and may be pricing in weaker economic conditions than many are anticipating. Rates also moved lower as investors snapped up bonds, thinking that perhaps prices had fallen too aggressively. It is a bit of a back and forth at this point, but if the economy is pushed into a steeper slowdown than what is being forecasted today, bond returns over the next few quarters might see a strong reversal from what was witnessed in H1 2022.

If you have any questions, concerns or items you would like to discuss, please contact our office.