The U.S. stock market registered its second consecutive monthly gain in November as all three major indices climbed during the month on the back of Fed Chair Jerome Powell’s dovish comments. As the third quarter earnings season wound down, many companies indicated that they were feeling the pinch from rising interest rates and a downturn in consumer confidence, and issued negative forward guidance as a result. In crypto news, the total market capitalization of digital assets plunged by 16% in November, with investor confidence in the space ebbing in the wake of the collapse of the cryptocurrency exchange FTX.

Canada’s benchmark S&P/TSX Composite Index was 5.3% higher in November, as nine of its underlying sectors were positive during the month. The gain was led by the materials and information technology sectors, with 10.8% and 9.5% returns, respectively. Utilities and health care were the detracting sectors during the period, with losses of 1.2% and 0.3%, respectively. Small-cap stocks, as measured by the S&P/TSX SmallCap Index, rose 6.2% for the month.

The U.S. dollar depreciated 3.0% versus the loonie during the month, dampening the returns of foreign markets from a Canadian investor’s standpoint. Note that all returns in this paragraph are in CAD terms. U.S.-based stocks, as measured by the S&P 500 Index, gained 5.3% in November. The gain was led by the materials and industrials sectors, with respective returns of 10.6% and 6.7%. International stocks, as measured by the FTSE Developed ex U.S. Index, rose 9.9% in the period, while emerging markets jumped 14.1%.

Inflation in Canada rose 6.9% year-over-year in October, matching the increase in September. Faster price growth for gas and mortgage interest costs were moderated by slowing price growth for food. The Canadian economy added 42,700 jobs in October, and the nation’s unemployment rate was unchanged at 5.2%. The Bank of Canada is expected to keep up the pace of rate hikes with a 50 basis point increase in December, which would be the seventh consecutive rate hike by the central bank this year.

U.S. nonfarm payrolls increased by 261,000 in October, and the unemployment rate rose to 3.7%. The consumer price index eased to 7.7% year-over-year. The slowing inflation rate was due in large part to a 2.4% decline in used vehicle prices from a month ago. U.S. retail sales rose 1.3% in October. After four consecutive “jumbo” rate hikes of 75 basis points, Fed Chair Powell indicated that smaller increases are likely ahead and could start in December.

Chart of the Month 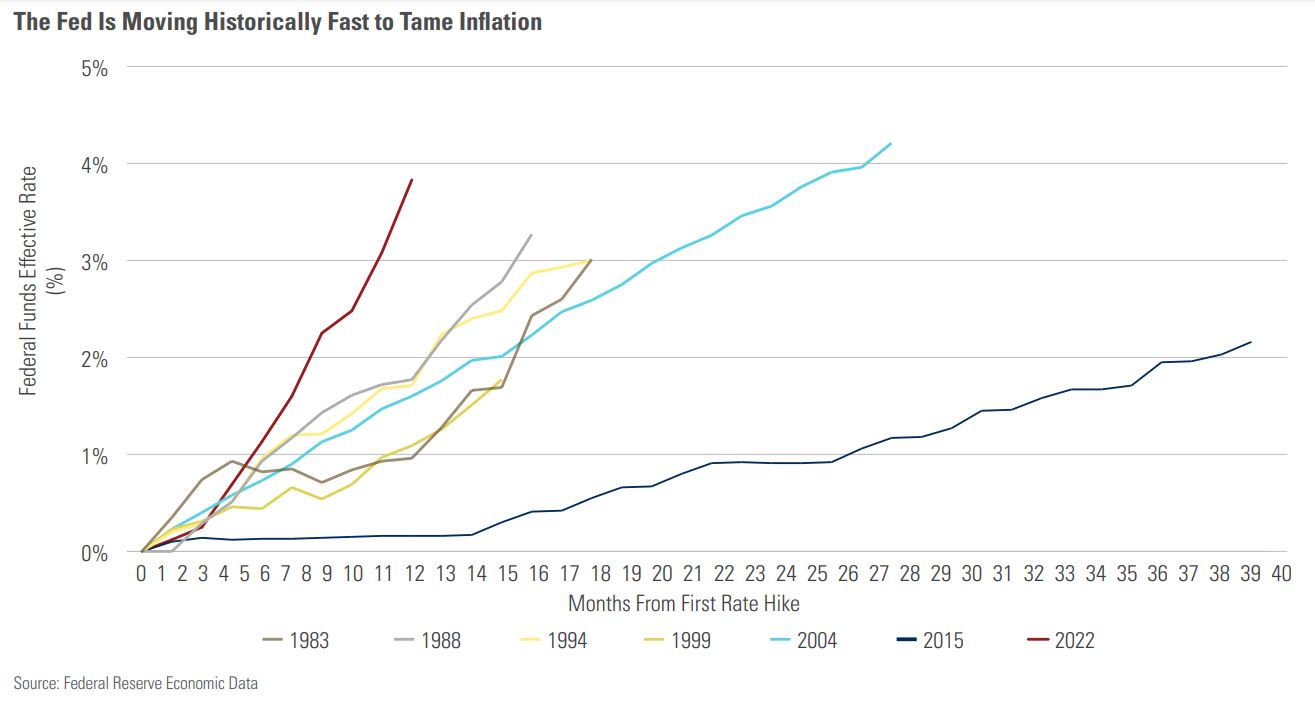 As part of its effort to tame 40-year-high inflation, the Federal Reserve has hiked its policy rate by close to 400 basis points so far this year and expectations are that the central bank will increase it again in mid-December. If the pace of rate increases seems swift, that’s because it has been. Rates have not been pushed this high, this quickly, in decades. As the chart illustrates, the magnitude of the current cycle of rate hikes is exceeded only by the 2004–2006 cycle. That cycle took 25 months to unfold – about three times longer than the current cycle. We have seen signs that inflation is beginning to abate, but the number of questions around what collateral damage the full-throttle rate increases might do to the broader economy is only increasing.