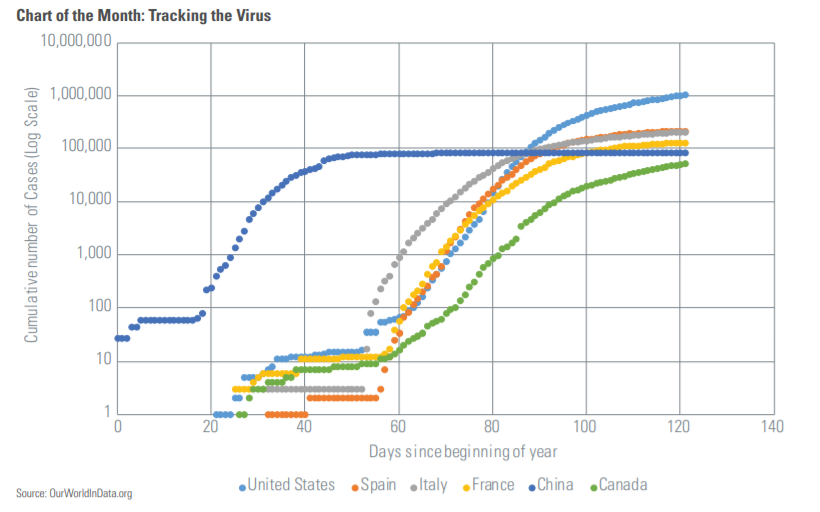 Stock markets around the globe were in rally mode during April after the historic drawdown experienced in the previous month. Investors took comfort in the significant stimulus measures introduced by governments and central banks to reduce the damage caused by COVID-19’s impact. Government ordered shutdowns and stay-at-home orders were still the norm in April, however, some countries began to make plans to reopen their economies.

Canada’s benchmark S&P/TSX Composite Index ended April up 10.5% with all but one of the benchmark’s underlying sectors producing gains during the month. Materials, information technology and consumer discretionary sectors led the way with respective gains of 33.0%, 29.3% and 20.1%. The
all-important energy sector recovered some of its losses from the prior month, producing a 12.7% return in April. Telecom services was the only sector in the red during the month, with a marginal loss of 0.3%. Small cap stocks, as measured by the S&P/TSX Small Cap Index, jumped 25% for the period.

The loonie was 0.9% higher versus the greenback during the month, somewhat dampening returns in foreign equity markets from a Canadian investor’s standpoint. Note that all returns in this paragraph are in Canadian dollar terms. U.S.-based stocks, as measured by the S&P 500 Index surged 10.6% in April, driven by the partial recovery in energy, which produced a 27.3% return. International stocks, as measured by the MSCI EAFE index, added 4.4% in April, while emerging markets gained 7.0%.

The price of oil remained volatile in April, falling 8%, despite Saudi Arabia and Russia’s agreement on production cuts. Gold remained popular amid the economic downturn, producing a 7% gain during the month.

The Bank of Canada maintained its overnight rate at 0.25% and announced provincial and corporate bond purchase programs of up to $50 billion and $10 billion, respectively. The Bank also enhanced its term repo facility to allow funding for up to two years. Canada’s unemployment rate increased to 7.8% in March, as the economy lost 1.01 million jobs during the month. Canadian GDP in February was unchanged.

The Federal Reserve held interest rates near zero and expanded its corporate lending programs to include investment grade corporate bonds and high yield issues. The U.S. jobless rate in March rose to 4.4%, as U.S. payrolls decreased by 701,000 during the month. U.S. GDP contracted at an annualized rate of 4.8% in the first quarter, the largest decline since 2008.

Total cases of COVID-19 has surpassed 3.2 million worldwide through the end of April. There does appear to be light at the end of the tunnel, however. Lock-downs, stay-at-home orders and social distancing measures have proved effective in slowing the spread, as daily case counts have been levelling off or declining for much of the world. Considerable uncertainty remains over the coming months as countries prepare to ease COVID-19 restrictions, and a lot will depend on the degree to which economies can effectively reopen.