Following a broad rally in July, equity markets kicked off August strongly, but the rally was derailed, and volatility spiked moving into the final two weeks of the month. Fed Chair Powell reiterated his commitment to choking off inflation at the annual Jackson Hole symposium, warning that the central bank expects to continue raising rates in a fashion that will cause “some pain” to the U.S. economy. Powell’s remarks sent markets tumbling. The Labor Department’s Job Openings and Labor Turnover Survey, or JOLTS report, showed U.S. job openings rose to 11.2 million last month, pointing to continued tightness in the labour market as employers struggle to fill vacancies. In other news, after increasing interest rates by 50 basis points for the first time in 11 years, the European Central Bank signaled another aggressive rate hike at their next meeting in September.

Canada’s benchmark S&P/TSX Composite Index was 1.8% lower in August, as eight of the benchmark’s underlying sectors were negative during the month. The decline was led by the information technology sector with a loss of 7.6%. Health care was the top-performing sector during the period, with a 9.4% gain. Small-cap stocks, as measured by the S&P/TSX Small Cap Index, fell 2.8% for the month.

The U.S. dollar appreciated 2.6% versus the loonie during the month, providing a boost to the returns of foreign markets from a Canadian investor’s standpoint. Note that all returns in this paragraph are in CAD terms. U.S.-based stocks, as measured by the S&P 500 Index, fell 2.1% in August. The loss was led by the information technology and health care sectors, with respective losses of 4.2% and 3.8%. International stocks, as measured by the FTSE Developed ex US Index, fell 2.6% in the period, while emerging markets faced losses of 1.2%.

Turning to commodities, the price of a barrel of crude oil plummeted 9.2% during the month, while natural gas surged 10.9%. Copper, silver and gold had a negative month, with respective losses of 1.5%, 12.1% and 2.6%.

Inflation in Canada remained elevated but slowed to a 7.6% year-over-year rise in July. The month-over-month drop in July was largely driven by gasoline prices, which fell 9.2% from a month ago. The Canadian economy lost 30,600 jobs in July, while the nation’s unemployment rate stayed at 4.9%. The Bank of Canada is widely expected to deliver another rate hike in September, after raising the policy rate by a full percentage point to 2.5% in July.

U.S. nonfarm payrolls increased by 528,000 in July, and the unemployment rate improved to 3.5%. The consumer price index eased to 8.5% year-over-year. The slowing inflation rate was due in large part to a 7.7% decline in gas prices from a month ago. U.S. retail sales were unchanged in July. Powell indicated another “unusually large” rate hike was possible in September after the central bank raised rates by 75 basis points in June and July. 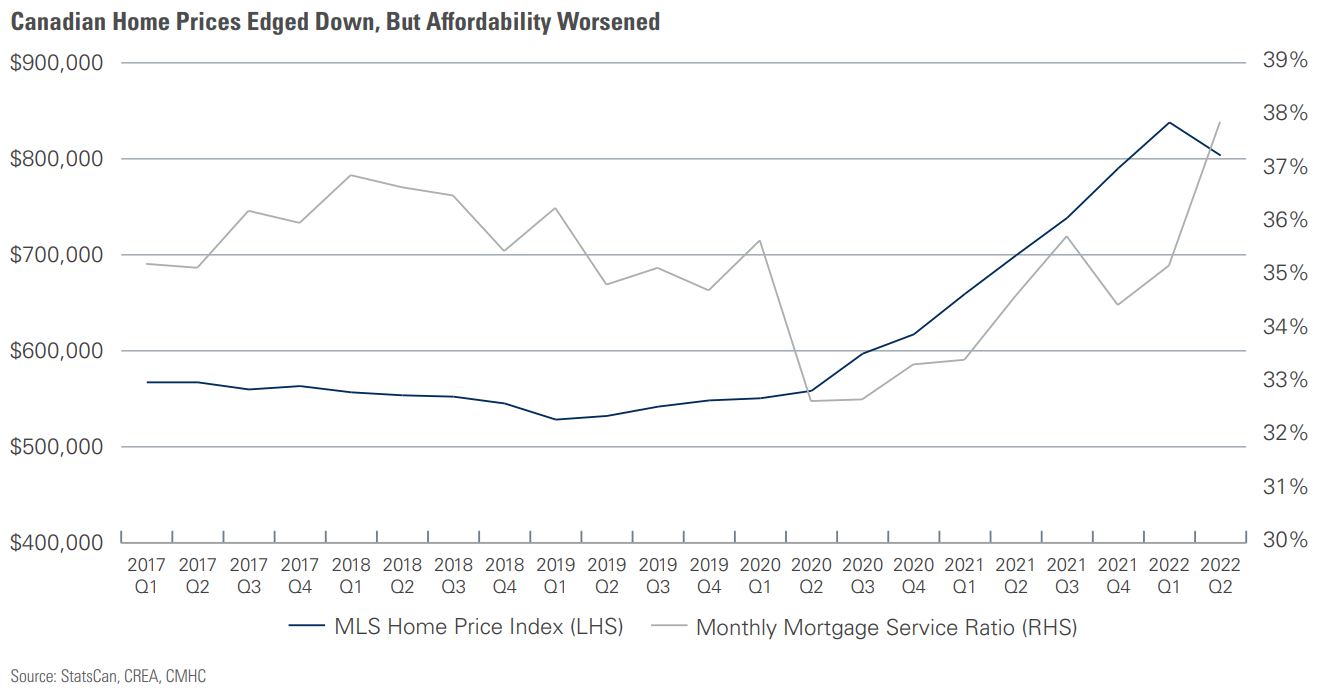 Since the Bank of Canada began hiking rates in March, Canadian home prices, which soared on the back of rock-bottom rates during the pandemic, have been steadily declining. According to the MLS Home Price Index, residential home prices dipped by 4.1% in Q2 vs. Q1, coming in at an average of $803,500. This lower price trend may be a relief for many, and the downward trend could continue, but the offset is that higher rates mean affordability remains challenging. The average Canadian mortgage service ratio, which measures mortgage payments as a percentage of income, has been
trending higher as rates have risen. This lack of affordability will not be helped by higher rates in the future. We don’t think it is a positive story for anyone looking for a quick bounce back in housing prices.